Back from the MSS, I review The Book of Mormon

I had a good time at the MSS this year, despite losing my flash drive in transit and having to rebuild my presentation from memory.  My regression table didn’t make it in, but I was able to talk about the general findings.

The project I presented on was a part of my ongoing research into the details of parent-child relationships and romantic (dating/sex, cohabiting, and marriage) partner selection.  The rest of that session was good, too, covering topics related to aging in a variety of contexts.

I attended a few other sessions, a committee meeting, and a focus group about the quality of the conference.  It was a productive couple of days.  And, I ATE.  As per usual, my photography was sparse, but I did manage to snap these photos of a local beer:

(Hopothesis – appropriate to the conference, but not all that hoppy in actuality)

and the counter at Pinkberry 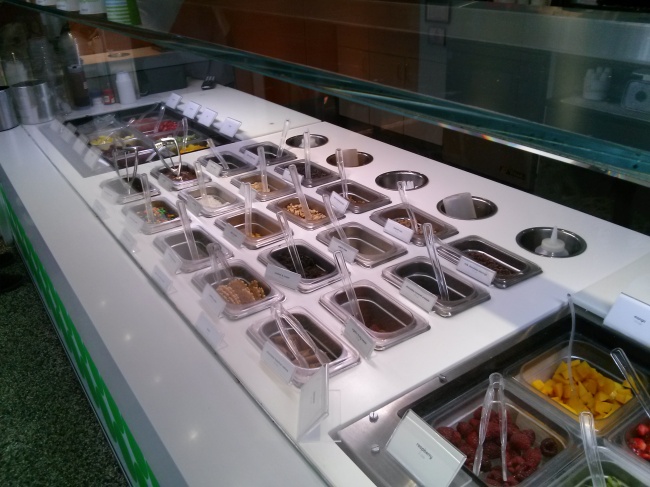 I also saw The Book of Mormon:

Musicals are always lost on me.

I experience musicals the way most people experience juggling: I admire the technical prowess, but it doesn’t really move me emotionally.  I laughed a couple of times, but I always felt like the overall sense of humor and the necessities of the form – staged musical comedy – were at odds.

I also have a more general complaint about South Park that also applies here.  They’re transgressive comedy works sometimes, but at some point it becomes difficult to tell where they’re trying to satirize, and where they’re just reproducing stereotypes because that’s a shortcut to shocking people, even when it goes against what seems to be the grain of their satire.

However, by the time the first act is over, the play has moved its setting to Uganda, which is portrayed as a village with dilapidated huts, in which “80% of us have AIDS,” even the doctor has “maggots in his scrotum,” and the local warlord insists that women have their clitorises removed because they terrify him.  Is this meant to satirize my (white and western) expectations of Uganda?  If so, the wink never really comes, and the satire fails to really undercut the stereotypes, and instead seems to present them essentially as fodder for comedy themselves.

As usual, the best part of the conference was seeing old friends, talking to colleagues and making new connections.  Looking forward to next year!

One response to “Back from the MSS, I review The Book of Mormon”

Research and reflection from both sides of the Atlantic

Videogame research review from a postdoc at Westfälische Wilhelms-Universität Münster